I’m happy with the design, disappointed that I can modify the firmware to really utilize the macros. I primarily purchased for the layers and macros too! Would definitely change my review to 5 stars if I could do this.

A
Anonymous
The Macro Pad I Didn’t Know I Needed

Awesome macro pad. Works in via, solid construction. The OLED screen is great so you can switch between layers (4 in total) and know exactly which one you are on. If I could find use for another I would buy again.

Via works swimmingly with this board, from QMK lighting to key assignment. Just make sure you load the keyboard JSON found in the keebmonkey wiki into VIA for the key layout enjoy a GUI.

Item never came, got no communication back from keebMonkey

V
Vincent Bekong
Versatile and no shortage of keys.

PURPOSE
I draw in clip studio paint so from the get go, the plan was to buy this and make it a full fledged companion to my drawing process.
I have had tons of fun setting it up in VIA and troubleshooting and so on!

BUILD QUALITY
The build quality of the board is superb, I expect nothing less from DOIO! The translucent bottom is a joy to have (even though I won’t be looking at it).
The top is a smooth anodized aluminum (mines the black one) that’s a joy to look at.

NOTE:
One thing to note in my experience is that when setting the board up in via, plug it in via the middle usb c port rather than the outer one. 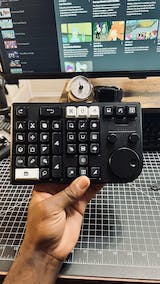 L
L.
Super cool board, be careful with switches

Received this and while the package was a bit crushed. I believe it was shipped from China so I suppose it's a tough journey. That said, there's lots of foam inside so the Keeb was fine. I had some cherry browns ready, plugged them in, put they keycaps on and.....like 1/3 of them didn't work. If it had just been 1 or 2 I might have believed it was an issue with the board, but when a random nearly half of the keys didn't work that seemed suspect. So I pulled the keycaps off, then the switches, and discovered I had bent the posts on half of the switches. Since I had simply jammed each one into a socket while watching YouTube I was, in retrospect, not giving delicate parts the attention they deserve. I replaced those switches (carefully), and everything worked fine.

The VIA software is pretty intuitive, and the capability right out of the box is really pretty thoughtful, there were a few things I hadn't expected: layer passthrough, tons of different layer toggle options, and the ability to map arbitrary functionality to the knobs. The default RGB patters are unreal... the last backlit keyboard I had was 5 years ago and the progress since then is wild.

Unfortunately the manufacture has elected not to opensource their QMK layout/keymap. Someone apparently figured out DOIOs 16 key board and created a keymap and layout for that board, so hopefully this one will follow.