CIY's first gasket keyboard is premium in quality and budget in price.

Came as described built my first keyboard with it 5/5

the board has some flaws that would make it perfect if fixed, like questionable stabs that are a pain to screw in and no wireless conn, other than that its quite pleasant to use, also this is my second comment on this board because it took like 45 days to get it, it was ultimately my postal office's fault, the delivery itself took like 1 month.

The keyboard in general is very good. There are some small things to consider before buying it though. First, the stabilizers have to be tuned for the sound to be satisfactory. and secondly the RGB is north facing. So cherry profile keycaps will not work on the keyboard. As i said in general the keyboard is very good. The gaskets are very nice and they provide a lot of dampening stuff with the keyboard. There is a space bar silicon which I personally did not use as it made the spacebar harder to hit but that is just me it did make it sound better.

This kit satisfied me. A budget keyboard that was gasket mounted. But, a few major issues. One; the on/off switch doesn't work, one of the selling points was this switch. Two, my ` key is acting as an e

I gotta say, this thing is amazing. For the price the kit is really good, this was my first custom build and it came out wonderful. I paired mine with some akko rose reds and some dark olviva reps, i also tape modded it. The only problem i have with this kit is the fact that the stock stabs are trash, i actually ended up using some durock v2s instead. Anyways great kit, definetly worth it especially if its your first custom build. 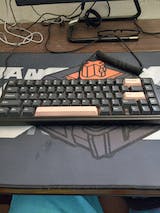 it's been a few weeks of usage, and i've gotten a long milage on this keyboard. i've been swapping the key switches quite frequently since day one. from the moment i started using this keyboard, i noticed a strange tightness in the hotswap sockets whenever i place a keyswitch inside. it is not a problem of the key switches themselves, as the brand and thickness of the pins vary, so i know that the problem i'm about to state is due to the different brand of hotswap sockets that ciy is using. in fact, ciy is using their own branded hotswap sockets instead of the more standard kalih hotswap sockets or the similar like. i had no problems thus far, until my spacebar hotswap socket contacts moved out of place. they're flimsy and fragile enough for the pins alone to render the hotswap socket unusable until i took apart the keyboard and had to forcibly move the contacts from inside the hotswap socket back into a position to make contact with the keyswitch pins. this spacebar socket, and likely many others will never be the same like new.

other than this one issue, i've had stellar thoughts on this keyboard. everything else works as intended. the appearance bares a striking semblance to the Ginkgo65, thus i built my keyboard build around that idea. a vary clacky sound signature as well.